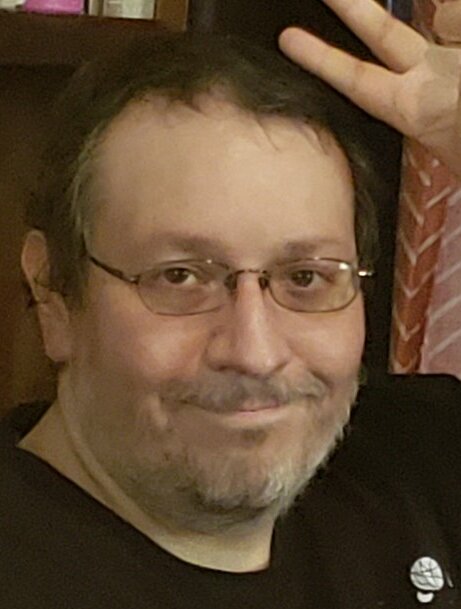 Please share a memory of Oscar to include in a keepsake book for family and friends.
View Tribute Book
Oscar Benito Garcia, 41, of Harlingen, TX passed away on Friday, May 20th, 2022. He is preceded in death by this grandmother and grandfather on his mother's side; Maria Santos Pequeno, Benito Martinez Pequeno, his uncle Ronnie Pequeno, and his aunt Ruby Pequeno. He is also welcomed with open arms by his grandparents Benito (his namesake) and Maria Santos along with his aunt and uncles. He is survived by his loving wife, Lisa Garcia; mother, Rachel Garcia; mother-in-law, Teri House (Darryl); brother, David Araujo; sister Melinda Garcia (Lynsey); as well as two nieces Summer Araujo and Dasia Araujo and one grandniece, Iris. He also has several cousins; and his 2 cats, Brick and Diona to help cherish his memory. Oscar was born and raised in Harlingen, Texas and was your typical, rambunctious, boisterous little boy. Like the Tasmanian Devil in real life, he was a whirlwind of energy. If you ever found yourself with a pulled ponytail or the butt of some harmless prank, you can guarantee he was the culprit. He loved sugary cereal and watching Saturday morning cartoons which he would reenact for everybody’s entertainment. His amazing memory (along with the fact that he watched the same movies and shows over and over) led to a great love of pop culture and iconic catch phrases. When he found something he loved, he dove in headfirst. Such was his love of video games. He was the perfect age to get swept up with the release of Nintendo and it was game over. He would live for the Friday night run to Blockbuster to rent a game and pull all-nighters, doing his best to beat the game by Sunday night. In the summer of 1999 he moved to Paradise, California where he met his future wife, Lisa. The two married in 2004. Together they moved back to Harlingen in 2008 where he worked several data entry jobs. He joked about being a “keyboard monkey” and did that until he found his work home with Roblox. He said it was the best job he ever had, and he genuinely loved it. His favorite pastimes included playing online games like Final Fantasy XIV and Destiny 2. Aside from gaming, he could be found cuddling with their cats and listening to his wife sing around the house; the joy he found in those moments are what he considered his true “happy place”. Oscar will be remembered for the gentle and kind soul he grew to be, all the while keeping that mischievous grin and spirit alive and well. You may sign the online guestbook, light a remembrance candle, or send words of comfort to the family of Oscar Benito Garcia at www.thomaegarza.com. Funeral arrangements entrusted to the care of Thomae-Garza Funeral Home and Crematory, 395 S. Sam Houston, Blvd., San Benito, TX 78586.
To plant a beautiful memorial tree in memory of Oscar Garcia, please visit our Tree Store

Look inside to read what others have shared
Family and friends are coming together online to create a special keepsake. Every memory left on the online obituary will be automatically included in this book.
View Tribute Book
Services for Oscar Garcia
There are no events scheduled. You can still show your support by planting a tree in memory of Oscar Garcia.
Plant a tree in memory of Oscar

Share Your Memory of
Oscar
Upload Your Memory View All Memories
Be the first to upload a memory!
Share A Memory
Plant a Tree