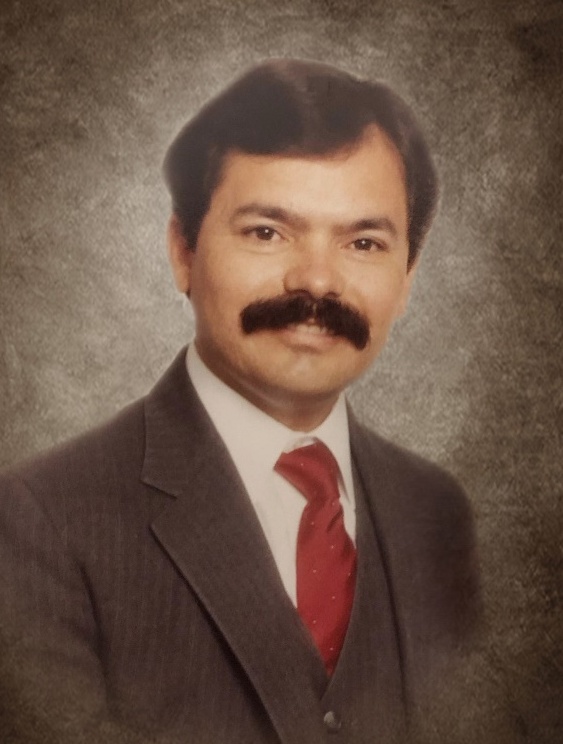 Please share a memory of Ernesto to include in a keepsake book for family and friends.
View Tribute Book
Ernesto Gonzales 1955- 2017 Harlingen-Attorney, Ernesto Gonzales “El Gallito”, a loving father, devoted son, respected lawyer, humanitarian, and philanthropist passed away on July 18th, 2017 at the age of 63. He will finally be placed to rest on May 14th, 2022. At the time of his death he was preceded in death by his parents, Louis Gonzales Sr. and Francisca Gonzales and a nephew, Samuel Gonzales. In the time between his death and burial he is also joined in death by his niece, Rachel and his sister, Gloria Gonzalez. He is survived by his loving son, Ernest J. (Sarah) Gonzales. He is also survived by his siblings, Louis, Jr. (Olga) Gonzales, Johnny (Elisa) Gonzales, Enrique (Rosia) Gonzales, Alice Gonzales, Mary Ann Villafana, Adela (Davin) Tedeton and numerous nephews and nieces. Ernesto Gonzales was born and raised in Primera. After graduating from Harlingen High School in the class of 1974, he attended Pan American University and received a Bachelor of Arts, graduating Magna Cum Laude in the class of ’77. At the age of 22, he was elected as the mayor of the city of Primera. He then received his Juris Doctorate from Thurgood Marshall University, class of ’81, graduating in the top ten percent of his class. He began his career in law in the Law Firm of Abel Toscano. He then partnered his own law firm with his friend Noe Robles. After which he proceeded to open the Law Office of Ernesto Gonzales. From this office he served many people of the Harlingen community and beyond as an attorney for more than thirty years, focusing on family law. He was often referred to by his nickname, El Gallito, a nickname given to him by Judge Darrell Hester because Ernesto fought for his clients so passionately and would never give up. Ernesto championed many causes, actively giving of his time for fundraising, donations, and events often focusing on benefiting children in need. He sponsored several Softball and Baseball teams for the American Little League. He also sponsored the Royal Rangers troop for La Primera Assemblies of God Church. He organized and participated in trail-riding fundraisers for the Muscular Dystrophy Association and for the Lower Valley Foster Parent’s Association. Many of the trail rides and donations he made were in service of The Make a Wish Foundation. Ernesto was also very active in local politics. He campaigned often for candidates that he believed strongly in. He could often be seen riding his horse Alamo with campaign signs and stickers for his friends and allies in the Valley and greater Texas. Many also knew him from his reenactments of Pancho Villa that he did with the Texas Air Museum. Ernesto Gonzales was an avid outdoorsman. He loved to hunt, fish, camp, hike and travel. He loved horse riding to the point of being considered by many as a cowboy. He also loved movies. His favorites were the ones where the good guys won in the end. He loved music of all kinds and would sing from his heart. In recent years he had begun writing stories with Bible themes in the hope to uplift others and bring them closer to Christ. Ernesto had become a Christian at a young age and was proud to raise his son in the faith of Jesus Christ. He will be greatly missed by all who knew and loved him. Thanks to the Harlingen Police Department and the Texas Rangers for their diligence in finding Ernesto so that he may be put to rest. And also thanks to then District Attorney’s office for seeking justice for Ernesto. Special thanks to Curtis Bonner for his legal help during this difficult time. A visitation will be held on Friday May 13th at Thomae-Garza Funeral Home in San Benito from 6 p.m., until 9 p.m., with a Prayer Service beginning at 7 p.m. with Rev. Raymundo Silva officiating at Thomae-Garza Funeral Home in San Benito. Church Services will be held at 10:00 a.m. on Saturday, May the 14th at Faith Assembly of God Church, 22510 N. Expressway 77, in Combes officiating by Pastor George De La Garza. Interment will follow and Ernesto will be laid to rest at Restlawn Memorial Park in La Feria, Texas. Serving as pallbearers will be E. J. Gonzales, J. J. Gonzales, Jeremiah Gonzales, Joshua Gonzales, Mario Ysaguirre, Noe Robles, and Isidro Moreno. You may sign the online guestbook, light a remembrance candle, or send words of comfort to the family of Ernesto Gonzales at www.thomaegarza.com. Funeral arrangements entrusted to the care of Thomae-Garza Funeral Home and Crematory, 395 S. Sam Houston, Blvd., San Benito, TX 78586.
To send flowers to the family or plant a tree in memory of Ernesto Gonzales, please visit Tribute Store
Friday
13
May

Look inside to read what others have shared
Family and friends are coming together online to create a special keepsake. Every memory left on the online obituary will be automatically included in this book.
View Tribute Book
Share A Memory
Send Flowers
Plant a Tree