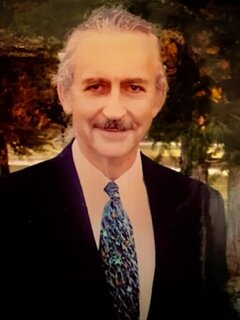 Please share a memory of Robert to include in a keepsake book for family and friends.
View Tribute Book
Robert Russell Somervill, M.D. passed away peacefully at his home in San Benito, Texas on September 30, 2022, surrounded by his family. He was born on January 19, 1933, to Russell and Elsie Somervill in Jackson, Michigan. He graduated from Jackson High School in 1950 and from Michigan State University with a B.S. in Chemical Engineering in 1954. He completed medical school at Northwestern University Medical School in Chicago, Illinois in 1959. He began his residency at Highland-Alameda County Hospital in Oakland, California in 1961. He enlisted in the Army and began ear nose and throat training at Fort Bragg, North Carolina and Fort McPherson, Georgia from 1961-1963. He completed his residency in general surgery at Cook County Hospital in Chicago, Illinois in 1964 and his residency in otolaryngology at Northwestern University Hospital in 1967. With a family of 5 children, he moved from Chicago to the Rio Grande Valley in 1967 to begin his private practice in Harlingen, Texas. He had many professional achievements including being Certified by the American Board of Otolaryngology in 1969, Diplomat in the American Academy of Otolaryngic Allergy in 1986, Certified in Clinical Nutrition in 1998 and Associate in Clinical Nutrition in 2009. His private practice was mainly in Harlingen, but he served patients all over the Valley and performed countless ear, nose and throat surgeries often helping generations of families. He served on the staff at most Valley Hospitals including Valley Baptist Medical Center, Edinburg, McAllen, Weslaco, Brownsville, and San Benito. Outside of medicine, he had a variety of interests many of which resulted in him opening a store including The Pereion Antiques Store located on Jackson Street in Harlingen and The Better Health Food Store where he offered nutrition and better health counsel. He enjoyed collecting stamps and coins, leading hobby groups, and displaying his finds at the annual Wildcat Show in Brownsville. He was passionate about being in his yard, planting or tending to palm trees, gardening, or caring for his flock of animals over the years including chickens, ducks, goats, pigs, cattle, a horse, and numerous dogs and cats. He enjoyed tropical birds and had owned macaws and parrots including his beloved blue and gold macaw Dr. Doolittle who lived to age 38. He was well read with a variety of interests from medicine to history and classical music, leaving behind extensive collections. He proudly served in the U.S. Army and Army Reserves and attained the rank of Lieutenant Colonel. He enjoyed traveling throughout the U.S., Mexico and Europe. He so loved the medical profession and helping others that it was difficult for him not to renew his medical license this year. He was a healer to the end offering advice up until the last week of his life. He is preceded in death by his parents, his older brother Harold “Hal,” and his son-in-law Orie Roberts. He is survived by his children, Cynthia Roberts, Sarah (Troy) Utz, Eric (Tammy) Somervill, Ian Somervill and Emily Somervill, his grandchildren, Jonathan (Amy) Noyes, Andrew Noyes, Taylor Noyes, Nicolette Roberts, Marshall (Korey) Utz, Travis Utz, Alison Utz, Dylan Somervill, Dakota Somervill, and Julian Somervill, his great grandchildren Nolan Noyes, Griffin Utz and Russell Utz, life partner Gloria Nieto, and his sweet little companion dog Micah. He is grateful for the friendship, kindness and compassion of his neighbors and his caretakers. Family and friends are invited to his memorial service to be held on Friday, October 7, 2022, at 11 a.m. at Hillcrest Memorial Park Cemetery, 1425 N. Elm Avenue, Jackson, Michigan. In lieu of flowers, the family suggests a donation to Valley Baptist Medical Center Harlingen Auxiliary, the American Heart Association, the American Stroke Association, or a charity of your choice. You may sign the online guestbook, light a remembrance candle, or send words of comfort to the family of Robert Russell Somervill, M.D. at www.thomaegarza.com. Funeral arrangements entrusted to the care of Thomae-Garza Funeral Home and Crematory, 395 S. Sam Houston, Blvd., San Benito, TX 78586.
To send flowers to the family or plant a tree in memory of Robert Somervill, M.D., please visit Tribute Store
Friday
7
October

Share Your Memory of
Robert
Upload Your Memory View All Memories
Be the first to upload a memory!
Share A Memory
Send Flowers
Plant a Tree