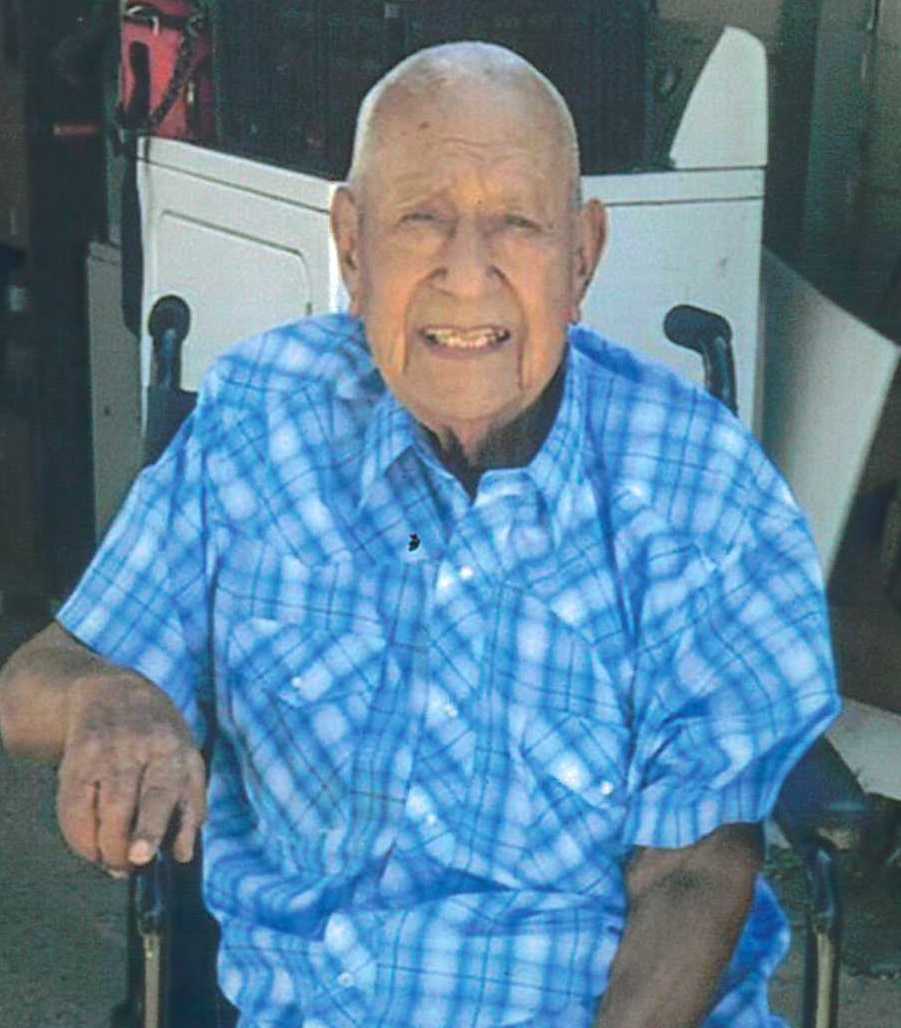 Ramon Aguilar “El Bolillo” was born in San Benito, Texas on September 7, 1926, to Jesusa Alvarado “La Tia Chucha” and passed on January 7, 2021 at the age of 94, years young. He was a Huckleberry Finn of his era. He had stories of how he would go to work with the men of the neighborhood on horse and buggy. He showed us his scares of when he and his friends would jump barbed wire fences. How, when he was playing downtown a Model T hit him and he got a cut on his head with the license plate. Through his stories we saw the booming of San Benito during the 1930’s – 1960’s. In 1944, he married Jesusa the love of his life. Their wedding lasted three days and Narciso Martinez played at the wedding. He joined the Navy and was stationed in San Diego, California. While there he made many friends and kept in touch with them throughout the years. During the Braceros Era (1940- 50’s) he had several crews. He was very well liked by the men since he would treat them very well. He would take them to the movies, to town and to the beach. When it was time for them to leave some of the men cried. 1950-60’s He was a troquero that would take people to pick cotton to Synider, Rosenburg, McKinney, Ennis, Lubbock, Childress, San Angelo, Loyola, Vicks, and other places throughout Texas. 60-70’s He begin to migrate to Michigan, Ohio, Indiana, Illinois, Arizona and California to hoe beets, pick tomatoes, cherries and pickles. He also worked at Alexander Packing Co. which was a job he didn’t like to remember. He worked at Marine Military Academy. Most of his life he worked as a laborer. The best time he had was when the Workforce sent him to Texas State Institute. He loved to go to school. He took basic classes and a first aide class where he got a certificate. He put to use what he learned a that first aide class. The story is that one day about twenty years ago while he was driving on the frontage road, here in San Benito, some people flagged him down and when he stopped there was a man that had stopped breathing and he gave him mouth to mouth and revived him. He taught us strong work ethics. Our father, taught us how to drive at an early age of seven years old by putting pillows on the driver’s seat. He also taught us how to change the spark plugs, change a tire and to always check the water and oil on our car. He loved teaching his grandchildren to make kites with newspapers, sticks and homemade glue and how to make sling shots. Till the end our father had a great memory. He could remember people’s names, where they lived and the names of their parents. He really enjoyed reading, math and was great with maps. He could read the newspaper in English and tell you what it said in Spanish at the same time. He had fond memories of going to school with La Maestra Aurora and then to Fred Booth School. He lived a hard life with no complaints. He was preceded in death by his wife, Jesusa; his mother, Jesusa Alvarado; his father, Jesus Aguilar; sons, Reynaldo, Geraldo and Jesus Aguilar; his siblings, Francisca (Rosendo) Sierra, Teresa Salazar, Amalia (Refugio) Gonzales, Ventura (Leandro) Puente, Casimira (Lupe) Leal, Emilia (Jose) Bañuelos, Juanita (Manuel) Gomez, Alfredo Salazar and Ignacio (Senida) Aguilar. He is survived by his children, Ramona Aguilar, Noemi (Antonio) Hernandez, Moises Aguilar, Viola Vasquez, Juan (Delia) Aguilar, Elida Garcia, Rosaura (Rusebel+) Sanchez; his grandchildren, Moises Aguiklar, Jr. that he helped raised, Juan Gonzales, Roberto Herandez, Aminda Hernandez, Cynthia Stiefel, Cynthia Martinez, Salvadodr Aguilar, Esmeralda Vasquez, Jerry Vasquez, Elvira Cortez, Leon Ramos, Belinda Aguilar, Erica Alvarado, Veronica Reyes, Angel Sanchez, Joel Sanchez and Angela Tawater; 49 grandchildren and 15 great-grandchildren. The family would like to thank Viola for taking care of her father, Moises for being there for him. Dr. Cecil Simmons, Dr. Rafael Lopez, Dr. Brajesh Bhatla, Dr. Shereet Hilmy, Dr. Jario Rodriguez, Dr. Danilo Asase, Delia’s Day Care and Ismael PA Heart Clinic. Visitation will be held on Tuesday, January 12, 2021 from 5 p.m., until 9 p.m., with the recitation of the holy rosary to be held at 7 p.m., at Thomae-Garza Funeral Home. A graveside service will be held at 2 p.m., at Mont Meta Memorial Park Mausoleum. Due to current restrictions, this establishment will follow the 25% occupancy limit and all persons shall institute social distancing of a minimum space of 6 feet apart. All individuals must wear face coverings or masks. You may sign the online guestbook, light a remembrance candle, or send flowers and words of comfort to the family of Ramon Aguilar at www.thomaegarza.com. Funeral arrangements entrusted to the care of Thomae Garza Funeral Home and Crematorium, 395 S. Sam Houston, San Benito, Texas, (956) 399-1331.