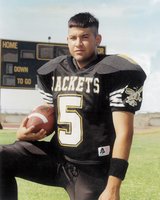 Justin Keith Solis, age 39, of Sebastian, Texas, passed away on Thursday, January 7, 2021, at Valley Baptist Medical Center in Harlingen, Texas. Justin is survived by his parents, Joe and Irma Solis of Sebastian, brother Brandon Joseph Solis and sister-in-law Adele Clinton-Solis and their children Colt and Adele Marie Solis, of Harlingen, and his brother Charley Solis, of Sebastian. He is preceded in death by his grandparents, Juan and Carmen Garza of Port Isabel, Charley and Ofelia Solis of Sebastian and uncle Charlie Solis Jr of California. Justin was born in 1981 in Harlingen, Texas. Growing up, he was a natural athlete, excelling in every sport he joined. He attended Lyford and Edcouch-Elsa High School where he was an elite athlete and played basketball and football. As a star kicker nicknamed “Thunderfoot” by his team and coached by his father and hero Joe Solis, Justin helped advance the Edcouch-Elsa Yellowjackets to the quarter-finals of the Texas state playoffs in 1997 and was selected first-team All Valley. After graduating from Lyford High School in 1999, Justin coached track, football and 7-on-7 football in Edcouch-Elsa and later held positions with the United States Postal Service and FedEx and in 2018 moved to West Texas where he accepted a position with NexTier. Justin valued family above all else and was a loving, playful uncle to his niece and nephew. After learning his nephew loved football, he arranged a family trip to an NFL game in Houston, where they cheered on the Texans and then went ice skating. A social, friendly man, Justin will be remembered for his big heart, quick wit, huge smile and overwhelming generosity to friends, family and strangers. Justin once saw a homeless man in Odessa, and shocked by the cold weather in West Texas, he immediately went to buy blankets and hot food for the stranger in need - just one example of the type of generous soul he had. He enjoyed lap swimming, watching Tampa Bay Buccaneers football games and being surrounded by family and friends. Private services will be held for the Solis family. In lieu of flowers, memorial donations can be made in memory of Justin Keith Solis to the gofundme account: https://gofund.me/c4bfb20a You may sign the online guestbook and send words of comfort or sympathy cards to the family of Justin Keith Solis at: www.thomaegarza.com. Funeral arrangements entrusted to the care of Thomae-Garza Funeral Home and Crematorium, 395 S. Sam Houston, San Benito, Texas, (956) 399-1331.