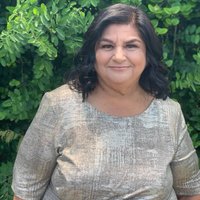 Alicia Robledo Muñoz, 69, of San Benito, Texas entered eternal rest on Sunday, September 6, 2020. Alicia was born on November 12, 1950 in Weslaco, Texas to Guadalupe and Anita Robledo. She is preceded in death by her husband Ramon Muñoz and grandson Gerardo Muñoz Jr., survived by her sons and daughters, Ramon Muñoz Jr., Diana Jaramillo, Ceasar Muñoz, Gerardo Muñoz, Rita Muñoz, Bernardo Muñoz, and Amanda Muñoz. Alicia will be lovingly remembered by numerous grandchildren, great-grandchildren, sisters, brothers, nieces, nephews, cousins, friends, and family. Alicia was first and foremost a faithful servant of God. She grew up in her hometown of Weslaco, Texas where she attended Weslaco High School. As a member of a migrant family, Alicia traveled the country working alongside her parents, brothers, and sisters. She often spoke about the various states they visited and produce they gathered. Alicia married Ramon Muñoz in Hobbs, New Mexico on November 6, 1967. The pair continued to work and travel as they grew and raised their family. Alicia and Ramon eventually settled in El Ranchito, Texas on the outskirts of San Benito, Texas. Alicia was widowed at the age of 47 and never remarried. She dedicated the rest of her life to her children, grandchildren, and great-grandchildren. Alicia had a passion for cooking and baking. She was specifically known for her homemade banana breads, tamales, and tacos. Alicia was most often referred to as Grandma Licha and her home was widely considered a warm and welcoming place to all. She greatly enjoyed supporting her grandsons and granddaughters at sporting events. Alicia was diagnosed with cancer in December of 2019. She battled her diagnosis until her passing. Alicia will forever be remembered as a devoted mother and loving grandmother. Sons Ramon Muñoz, Ceasar Muñoz, Gerardo Muñoz, Bernardo Muñoz and grandsons Juan Ramon Medina, Vincent Muñoz, (Honorary) Bernardo Muñoz will serve as pallbearers for the funeral services. A celebration of Alicia’s life will be held on Thursday September 17, 2020 from 5:00 pm to 9:00 pm and Friday September 18, from 8:30 am to 11:00 am, with a chapel service at 10:00 a.m., at Thomae Garza Funeral Home, 395 S Sam Houston Blvd, San Benito, TX 78586. A graveside service will proceed on Saturday September 19 at 2:00 pm at Mont Meta Memorial Park in San Benito, Texas. The family wishes to send a special Thank-you the Thomae Garza Funeral Home for their care and compassion during this difficult time. You may sign the online guestbook, light a remembrance candle, or send words of comfort to the family of Alicia Robledo Muñoz. Funeral arrangements entrusted to the care of Thomae-Garza Funeral Home and Crematorium, 395 S. Sam Houston, San Benito, Texas, (956) 399-1331.