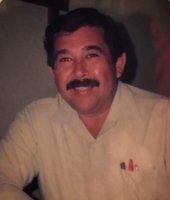 Rogelio Cruz Cuevas (Roger), 75, went to meet his Lord and Savior on February 8, 2020. He was a man of determination, strength, and faith defying the odds of his illness and living his life firmly planted in God’s timing. He was born on October 25, 1944 in Villa Nueva, TX. Rogelio worked hard his entire life. As a young man, he worked the fields and traveled as a migrant worker to California sending money home to his parents. He was most proud about earning enough money to buy his first car at the age of 14. A fact he recited numerous times to all. Rogelio owned his own service station, worked as a security guard and was in sales for many years up until his illness prevented him from doing so. He spent the rest of his years enjoying morning coffee at various cafés, catching up on the “chisme” with his friends and spending time with his family in person, on the phone or with a video chat making silly faces or telling jokes to make someone laugh. His sense of humor and ability to make friends out of strangers are gifts that will be greatly missed. Roger’s journey in life ultimately led him to salvation and while his last years were filled with much physical pain, he is now healed in heaven. Rogelio was preceded in death by his parents, Manuel Cuevas Sr. and Julia Cuevas Martinez; and his siblings, Manuel Cuevas Jr. and Beatrice Cruz. Rogelio is survived by his wife of 39 years, Oralia T. Cuevas; his children Anna (Ron) Erickson, Norma (Maurice) Sanchez, Danny (Celina) Tandy, and Rogelio Jr. (Kim) Cuevas; grandchildren, Kayla Parrett, Devan Guerrero, Hannah Tandy, Kristen Sanchez, Adrianne Ortiz, Mariah Sanchez, Annika Cuevas, Tyler Erickson, Mallory Buendia, Richmond Buendia, Ashten Ingle, and Marcus Ingle. He is also survived by his siblings Hector Cuevas, Socorro Cuevas, Margaret Smith, and Anita Cuevas. The Cuevas family would like to extend their gratitude to Dr. Bhatla and Dr. Sheriff for their years of dedication and caring treatment, the nurses at US Renal Care and all the staff members who cared for him. A memorial service will be held at 10:00 a.m. on Friday, February 14, 2020, at First Baptist Church, 300 E. Ocean Blvd., Los Fresnos, Texas and burial will follow at Los Cuates Cemetery. You may sign the online guestbook and send words of comfort or sympathy cards to family of Rogelio Cruz Cuevas at: www.thomaegarza.com. Funeral arrangements are entrusted to the care of Thomae-Garza Funeral Home and Crematory, 395 S. Sam Houston Blvd., San Benito, Texas, (956) 399-1331.