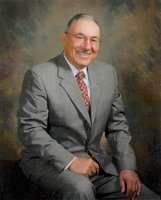 He is preceded in death by his father, Carlos G. Garza.

Gus, as he was known to most, had a long life and a long career.  Gus graduated in 1971 from Los Fresnos High School and went on to complete a Bachelors degree from Pan American. He then taught for 5 years and furthered his education by earning a Master’s degree from Texas A&I University. In 1982 he received his Juris Doctor Degree from Creighton University School of Law in Omaha, Nebraska.  He was admitted to the State Bar of Texas and began his legal career as an Assistant District Attorney for Cameron County.  In 1993 he moved to Raymondville, TX and was elected to serve as the Willacy County District and County Attorney.  Upon completion of his term, he returned to Los Fresnos and resumed his private practice.  He served the community proudly upon being elected as the Justice of the Peace, Precinct 6.  In 2013, Gus returned to where he initially started his career by working with the Cameron County District Attorney’s Office.  He retired in 2017 and spent his time doing the things he loved; spending time with family, traveling, working his ranch, counting his livestock, admiring the beautiful sunsets and sunrises and even took up fishing.  Throughout the many passages in his life, he was always committed and dedicated to bettering his community.  As a lifelong civil servant he was a member of the Los Fresnos CISD school board, Kiwanus Club and parishes of Cameron and Willacy County.  Gus will always be remembered for never missing an opportunity to make any moment a “teachable moment.”

A funeral mass will be officiated at 1:00 p.m. on Monday, December 31, 2018 at St. Cecilia Catholic Church in Los Fresnos, Texas. He will be laid to rest at Mont Meta Memorial Park in San Benito, Texas.

In lieu of flowers, you may send memorial donations in memory of Gustavo Ch. Garza to: BBVA Compass Bank account # 6767817345.  The family will be creating a scholarship in his honor.

You may sign the online guestbook, light a remembrance candle, or send words of comfort to the family of Gustavo Ch. Garza at: www.thomaegarza.com.